Interview with Karen Eisenbrey author of Daughter of Magic 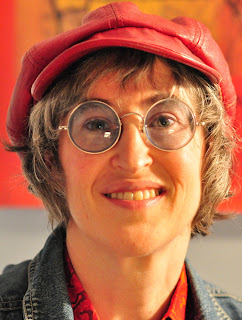 Welcome Karen, tell us a little about yourself.

I live in Seattle, WA, where I lead a quiet, orderly life and invent stories to make up for it. Without my hat, I am invisible. I have been writing for 20 years (but meaning to write for 40) and was first published in 2013. I also sing in a church choir, play drums in a garage band, and surprised myself by writing songs for my debut YA novel The Gospel According to St. Rage. My newest book is a YA wizard fantasy, Daughter of Magic, released by Not a Pipe Publishing in 2018. I share my life with my husband, two young adult sons, and two mature adult cats.

Congratulations on your new release. Karen will you share a short excerpt from your novel?

Luskell walked at twilight on a country road she didn’t know. She wasn’t lost; she was on her way to Deep River. It was the town that was lost, and she had to find it.
She could make out silhouettes of scattered trees in the distance, but no lighted windows or darkened houses. Yet she knew she was near, the way she knew things in dreams. Oh. A dream. Of course. She kept walking.
But not alone. Luskell sensed a presence at her side, keeping pace with her. She didn’t dare look but stopped in the road and whispered, “Who are you?”
“Don’t you know me, Luskell?”
Her fear fled, and she turned to face her companion. He was a tall young man, rail thin, with Mamam’s pale skin. It should have been too dim to see clearly, but a light from somewhere else showed his hair to be as red as Mamam’s, too.
“Ketwyn?”
He grinned. “You do know me! I knew you would! I told him you would.”
“But you’re a baby. You’re dead.”

What brought about the idea for this book?

This is actually the fifth book I've written in this setting, though the first four are not (yet) published. In the spring of 2000, I had a very brief dream with two wizards and at least three plot twists. From that seed grew my first novel that was worth working on, and that book became four, a big family saga in a realistic natural setting but with magic woven through. In 2009 I returned to that world with a new story about the next generation. My main character Luskell hadn't even been born yet in those earlier books but wouldn't have existed without them. I imagined a young teenager who had grown up with magic but had concluded prematurely that she had no power herself. What if that latent, unacknowledged power allowed the dead to speak to her her in dreams? And what would happen if her power manifested when she was apart from her parents and had to figure things out for herself?

Karen, where do you see yourself in five years?

I'll still be writing because I can't stop now. There's a chance I'll be retired, which should give me more time to write! If all goes well, I could have 2, 3, even 4 more books out by then.

Writing can be addictive. Currently, what are you working on?

This year, I have been working on sequels to both my published novels, which are both young adult but very different from each other. I just submitted the sequel to The Gospel According to St Rage, which is comic urban fantasy about garage rock and superpowers, so I'm about to return to wizard fantasy with the second Luskell book. It's basically done but way too long, so I have a lot of cutting ahead of me. Sob!

What has been the most difficult thing you have struggled with since you began a career in writing?

I am not a natural self-promoter. I have had to push myself outside my comfort zone to pursue reviews, interviews (like this one!), speaking engagements, etc. I try to do at least one thing a week, whether it's writing to bloggers or reaching out to bookstores. I can handle that much, and I've learned to be realistic: I don't beat myself up over the things that go nowhere and I'm very thankful for anything that pans out.

Every little bit counts. Tell us a little bit about your main characters.

My main character Luskell is 14 and a half (so she thinks of herself as almost 15) and fairly cosmopolitan for her world. Her parents are both powerful magic users but Luskell hasn't developed any powers of her own yet, and assumes she never will. Luskell is charismatic and impulsive, which means she drags her friends into scrapes but also gets them back out. Her friend Jagryn is older but less experienced. He's also more level-headed but allows Luskell to draw him into trouble because he has a crush on her. Laki is older than either of them and from another culture, so he brings a different perspective and skill set when the three of them decide to learn magic on their own.

Karen, what was your favorite scene to write?
There are two that spring to mind: 1) When Luskell first meets her grandfather Knot in a dream. He was a complex and difficult character who I had enjoyed writing, but he died at the end of the previous book, before Luskell was born. I loved bringing him back into the story and introducing them to each other, because they have a lot in common. 2) When Luskell transforms for the first time, because I love trying to get into the experience of a non-human animal (in this case, an owl) and to imagine flying under one's own power.

Do you have people read your drafts before you publish?  How do you select beta readers?

I read chapters aloud to a small writers group. When something is finished, I have four main beta readers, including my husband and my sister, who tend to make big-picture comments and also find typos. One of the others volunteered years ago when I had finished only one or two things. She reads every book at least twice and offers detailed responses. The fourth I encountered in an online authors' community. I think I won one of her books in a drawing and loved it so much that I sought her out and we hit it off and started reading for each other. She also offers detailed and insightful comments. Although they all have individual manners of reading, I trust all of them to read intelligently. Somehow, they also manage to find different, mutually exclusive sets of typos! I carefully consider their suggestions and objections, which invariably improves the book.

Having a good team is a critical part of the writing process. Who designed the artwork for your cover?  Or did you design it yourself?

We were working with an artist who had come up with a really nice character design, but the artwork was going in more of a historical romance direction, rather than fantasy, and he wasn't going to be able to make the changes we wanted and still finish in time for the planned release. So Ben Gorman, one of the co-publishers, put together a design, I suggested color changes, and that's what we went with. It wasn't what I was expecting but I think it turned out really nice and I can explain how every element fits with the story, if anyone asks. It's also unexpectedly similar to the cover of my first book, even though they are unrelated.

How do you handle criticism when it comes to your writing?

Like a grownup, which is to say I keep my pouting and arguing to myself. Then I take a deep breath and think about whether the critic is onto something. Usually they are, and I try to use that to improve the next draft or project.

Which do you find more challenging inventing the hero or the villain?  Why?

Villains. The hero is usually the first to appear, almost like they self-invent. Then I have to come up with a worthy antagonist, which is difficult because I don't like to think about what kind of person would try to prevent my protagonist from doing their thing. And they have to have a believable motivation for doing that! I know I'm onto a good one when they're too much fun to write even though they're an awful person. More often than not, they're more misguided than evil, though I think the real villain of Daughter of Magic is unredeemable.

How many times do you think you read your book before going to print?

This is a book I'd been picking up and putting down over nine years, so probably at least 15 or 20, but I didn't keep count.

It's amazing how much time it takes to get a book ready for publication. Karen, do you have any last words?

I am not ambitious or aggressive about pursuing goals, but I've learned to be ready when opportunity climbs into my lap and starts to purr. 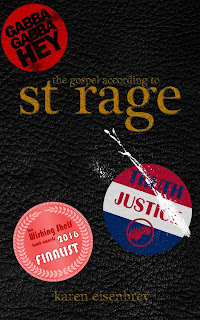 Thanks for sharing with us. Happy Reading!!