Interview with Myron Edwards author of Mistress of the Rock

Tell us a little about yourself, Myron.

I live on the ‘Island of Love’, Cyprus, with my wife Niki, whose background is Greek Cypriot. We have been here about 12 years. I have two kids with Niki, Alex (27) and Emily (20) and one from a previous marriage, Craig (31). I started work as a travel agent and stayed in the travel business for some thirty years; during that time, I played in a band as a drummer. I was competent, not great, and could keep a rhythm.
I have diversified in my working life on more than a couple of occasions. I became a copywriter for JWT, ran my own company from an idea I created called Tubewalking, which was short-distance short-walking maps for commuters and tourists in London. I have also designed and produced web-based and arcade games for the gaming industry.
During my time in Cyprus, I was a Creative Director for an ad agency, creating ad campaigns for all media, including TV, Radio, Press and mainline advertising. When the financial crash happened, once again I had to diversify, so not just concentrate on writing but find a job. I found one in the financial industry, where I have worked for the past 5 years. I am still in that industry.

Can you tell us what got you into writing?

My first step into writing was as a free-lancer writing scripts with my former band member, Phil Campbell, who had experience in the film industry, as he was a runner for Hammer Films, amongst other jobs he did. We wrote for the BBC and a very popular duo who were one of Britain’s best loved comedic pairs, accepted our material. We went our separate ways while still remaining friends to this day. But I started writing more satirical pieces for programmes such as ‘Week Endings’ and ‘The News Huddlines’, as well as ‘Not the nine O Clock News, a Kick up the 80’s with Tracey Ullman and The Marti Caine Show. All popular shows of the 80’s. During this time, I was at JWT in another capacity as a Travel Manager but was persuaded to take the copy test, which I passed and was enrolled into JWT as a junior copywriter. I was writing daily at JWT so naturally I started to develop plots for potential novels and screenplays. But it wasn’t until I came to Cyprus that I wrote my first book.

Which do you prefer: print books or e-books when you are reading?

Books in print is my preference. I like to hold a book, I feel closer to the story that way.

I agree, but I do like my kindle fire when I am on vacation, I can carry lots of books in a small amount of space. Have you been given any helpful advice?

Yes, and I have always respected people’s opinions, so yes, I have, but sometimes you must go with your gut feeling and that usually is for me what I do.

Currently, what are you working on?

The third part of the Mistress Trilogy.

Tell us a little bit about your main characters.

Richard Cole is a veteran British Soldier of the first Gulf War, who developed PTSD after he was ordered to be an observer on a mission to Highway 80 in Iraq. He found solace with the fascination of the legend of Aphrodite, who throughout the conflict was his constant sanctuary from war. On returning to Cyprus some years later, he pays a visit to her birthplace and this starts a stream of events which catapults him into a new and terrifying world of the unknown where choices are to be made.
Aphrodite, the mystic Goddess of myth and legend was born from the waves at a site called Petra Tou Romiou; she is an ephemeral spirit that at first protects, then taunts, and finally haunts Richard until his very soul is under her spell. Unable to fight her, he eventually succumbs to her seductive powers so that he will become hers.
Julie Cole, Richard’s American Boston-born wife, is a focal part of the story as she lends sanity to the story. She is more mature and astute than Richard. Is charismatic, good looking, and sexy, which makes her a difficult adversary for the temptations of the Goddess.

What is the easiest part of the writing process?  What is the hardest?

The easiest part for me is constructing the story, I often think of the end and build backwards. The hardest is finding time to write, especially if you work full time.

I know exactly what you mean.  Finding time to write with three kids and working is a challenge. Do you have people read your drafts before you publish?  How do you select beta readers?

I have an excellent editor, Athina Paris. She has transformed my story from my first draft which I sent to her, offering excellent critique, which I follow. It should also be said that James Hill, my publisher, has been a shining light in this whole project and he too read the draft, before publishing. Together they make a formidable team. For test subjects, I choose friends mainly, some family, but you are not always sure with family that you get a balanced and honest appraisal. I also ask people who are writers or are associated with writing.

I think it's important to find a good team when writing.  Getting valuable feedback is critical. What brought about the idea for your book?

An epiphany moment on my very first visit to the rocks in the early 90’s. I saw something on the walls of the restaurant that day, which at first surprised and then stunned me, at that point I knew I had to write this book, no matter how long it would take. It was only when we moved to Cyprus did I began this journey.

When I was in advertising I used to think in pictures, I found that so much easier to visualise the concept that way, the same is true for writing. I visualise the plot as if it was on the screen and then adapt it for the book. I wrote the screenplay before I ever wrote the book.

Myron, any last words you'd care to impart with us?

I am grateful for the opportunity to bring the story of the Mistress of the Rock to people’s attention. I know people say there are no original ideas, but I can say this hand-on-heart, you will never read or see another story like this in your lifetime, the image of the Goddess is totally unique and real, whether you believe it or not. My ultimate dream is for Mistress of the Rock to be made into a movie, as I believe it could be good for the island of Cyprus, bringing tourists, expanding the culture of the island, and providing a lasting legacy for the Aphrodite legend.

Thanks so much for sharing with us.  Happy Reading!! 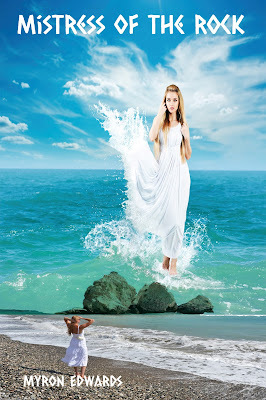