Interview with Scott Kinkade author of the Divine Protector Series 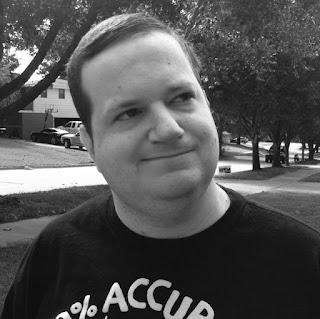 Today I would like to welcome Scott Kinkade. Scott, can you tell us a little about yourself?

My name is Scott Kinkade. I’ve written nine novels and a few short stories. My books usually fall into either science fiction or fantasy categories, but I occasionally veer off into non-genre stories. I have two series’ thus far, my steampunk Infini Calendar series, and my urban fantasy Divine Protector series. Everything else I’ve written stands alone.

As he walked back to the hotel, he mentally went over his itinerary for the next day. Attending the New Birth bash wasn’t the official reason he had come to . In truth, he had come here to visit . He had recently graduated from high school, and now he needed to find a college. He was considering a law degree. He wanted to uphold justice throughout Morovia, and he felt that was the best way to do it. He would defend the innocent and punish the guilty.
While he thought about this, he suddenly realized he was alone on a dark street. That made him nervous; , for all its splendor, had a high crime rate. He feared he might become its next victim.
He passed an alley. Without warning, a raspy voice whispered, “Ev Bannen.”
Ev stopped, frozen. Had someone in the alley just called his name? “Is someone there?” he said weakly.
For a moment there was dead silence. Then, “Ev Bannen.”
“W-What do you want?”
“Come...closer.”
He couldn’t explain why, but he felt compelled to obey the voice. He walked into the alley. Only a dim bulb above a backdoor provided any illumination. He was terrified but found himself unable to stop.
When he finally stopped deep into the alley, he detected faint movement in front of him. It looked like a dark swarm of things. He stood transfixed. Every instinct he had told him to run like a maniac, yet he couldn’t get his legs to obey him.
The swarm soon coalesced into a vaguely human shape. “Vaguely” was definitely the applicable term; the proportions were all wrong. It had huge bulbous arms, toothpick-thin legs and disk-shaped head. Ev couldn’t make out any more than that because of the lack of light, but he didn’t want to.
It reached out and stroked his face with its oversize hand—or maybe it was a claw. Ev wanted to cry out in terror, even though that wouldn’t have been very manly.

“Yes,” it wheezed. This is it, he thought. I’m going to die here, before I even have a chance to do anything with my life.
However, from somewhere above him, a radiant orange glow appeared. The…thing…jumped back, raising a massive hand in front of its face. It was then that Ev got a better look at it. The whole creature was black as midnight, and its skin—assuming that was skin—looked oily, like a snake. But the worst part was the face; it had none. It might as well have been a black hole.
Ev thought the scene couldn’t get any more surreal. He was wrong. Another figure came out of the air and landed in front of him. It was a man dressed like a college professor, with a dark suit and short cropped hair of a muddy hue.
“Not fair,” the creature hissed. Ev had no idea how the thing was talking with no mouth.
The man raised a fist. No, not just a fist—a flaming fist. He swiftly rammed it into the thing’s chest. It let out an earsplitting howl before emitting an orange glow and turning to ash.
Before tonight, Ev had no idea how much he had taken reality for granted. He realized, now, that it was a precious anchor, keeping you in the world you know, a predictable world full of rules, rules that all living things had to abide by. But this world he now found himself in, it had no rules. Anything could happen, and that was the truly terrifying thing about it.
The man turned around to face Ev. He looked to be in his forties, with hard features lining his face. Yet there was also compassion there. “Are you all right?”

All right? No, Ev was far from all right. He had been shaken to his core, and he honestly didn’t know how his bodily fluids had stayed inside him this whole time. In truth, he had experienced the terror of realizing he didn’t know anything about the world he lived in.
The man gave him a cursory examination. “Good; it didn’t hurt you. If it did, you’d damn sure know it.”
Finally, Ev managed to form a sentence. “What…what the hell was that?” He stared at the smoking remains.
The man eyed it with disgust. “A refghast. Low-level monsters. They feed on humans.”
Ev shook his head in disbelief. “I didn’t want to come in here, but I did anyway.”
“The refghasts emit a hypnotic signal that compels people to obey them,” he explained.
“But you didn’t obey. You…punched it with a flaming fist!”
He grinned. “One of the perks of being a god.”
Ev blinked. He could not possibly have heard that right.

“A…god,” he said in disbelief.
“Yes, Ev. I’m a god.”
He shook his head vigorously. “No way. That can’t be true. Wait—how do you know my name?”
The man said, “We’ve been watching you, Ev. We think you have what it takes to become a god yourself.”

What brought about the idea for this book?

I assume you mean God School? The idea came about around 2011-2012. I was still working on my Infini Calendar trilogy. I don’t remember exactly what happened, but I got this idea for a series that would be sort of like Harry Potter, but on a more bombastic level. Instead of going to school to become wizards, the characters would go to school to become gods. I also decided early on that one of the students would be a traitor. In addition, I had this image of a race of giants that would menace the protagonists. This ended up becoming the Nephilim. They were originally supposed to invade the school, but I realized they’d never be able to fit in there! So I had to switch gears and make them attack outdoors.

Where do you see yourself in five years?

Being a consultant on the movie version, if there’s any justice in the world. And making a lot of money.

Well best of luck to you! Make sure the movie sticks to the books, I hate it when Hollywood changes things. Scott, have you been given any helpful advice over the years? If so What?

“Show, don’t tell.” Also, avoid info-dumping. Don’t put a ton of information all in one place; space it out.

Currently, what are you working on?

I’m currently working on Return of the Nine, the sixth—and perhaps final—entry in my Divine Protector series.

Sometimes it's hard knowing where to end. Just remember you can always do a continuation series if you find that there is more to write.  Brandon Mull did it with Fablehaven and I am loving his new series. As an author what has been the most difficult thing you have struggled with since you began a career in writing?

Getting past bad reviews. A lot of people are going to tell you your writing is god-awful. And the more people that tell you that, the more you start to believe it. If you get more bad reviews than good ones, it can be overwhelming. On more than one occasion, I’ve questioned whether I’m a good writer. I even considered quitting. But the important thing is to believe in yourself but also be open to bettering yourself.

Tell us a little bit about your main characters

Ev Bannen was just a normal guy looking to have a normal life. But that all changed when he was accepted into Divine Protector Academy. Now he’s on track to becoming a god and taking on the responsibility that comes with that. However, he may always be burdened by the knowledge he’s killed people. Part of him thinks of himself as a monster for the lives he’s taken. Fortunately, he has Maya to believe in him. She has her own dark past, so she doesn’t judge him. She understands that people can be redeemed, even if she’s slow to trust others.

Scott, what was your favorite scene to write?

There are so many scenes I enjoyed writing. My favorite scenes are the ones where characters display their vulnerabilities: Maya reminiscing about her tragic childhood, Serika breaking down upon remembering her own death, etc.

What has been the best compliment you have received?

I’ll share with you the review on my short story “Hell is Everyone but You.”: Hell is Everyone But You by Scott Kinkade is a short story that was touching on many levels. It tells of a chance meeting in a holiday resort of two people that just want to escape reality. Fiction writers would say that it's harder to write a short story than a long novel. The challenge is not to rush things or introduce characters that are not fleshed out. This is a challenge that I feel Scott handled really well. This story encourages as well as offers hope for us all. One other thing I took from this story was the sensory sensitivity that people with Asperger's feel.

It's great to have a really good review like this one to go back and read when the negative ones get you down. What kind of research do you do before you start a new story?

It really depends on the setting. I had to do a lot of research for my novel The Game Called Revolution because it takes place in revolutionary France, I had to research things like Joan of Arc, the Women’s March on Versailles, the storming of the Bastille, the siege of Compiegne, etc. For my most recent novel, Aragami, I had to do a lot of research into the Shinto religion and its customs. For my novels that take place in a fictional universe, though, I usually don’t have to do much research because I decide what’s what in that world.

How do you promote your books? Any tips you can share?
Okay, so, if you’re writing a series, make the first book free outside of Kindle (say, on Nook). Then, put it on Kindle and ask Amazon to price match it. It’s not guaranteed to work, but the chances are good. Once your book is free, market the crap out of it. You’ll gain a lot more exposure than you’d have otherwise. And if people like the first book, they’ll shell out the cash for the rest.

Those are great tips. Scott, do you have people read your drafts before you publish?  How do you select beta readers?
Who designed the artwork for your cover?  Or did you design it yourself?
I’m part of a writer’s group, and we all critique each other’s work. They’ve been invaluable for my own writing. I also have an editor named Cathy Lopez (cvlopezediting@gmail.com). For my covers I use Ramon MacAirap (monmacairap@gmail.com). 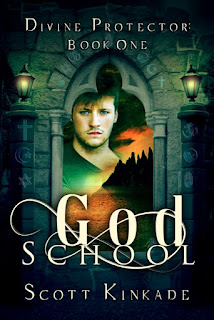 Thanks so much for sharing with us Scott. Be sure to check out more of Scott's works at the links below. Happy Reading!!